On January 26, 2020, at 0945 Pacific standard time (PST), a Sikorsky SK76 By helicopter, N72EX, collided with hilly terrain near the city of Calabasas, California. The pilot and eight passengers were fatally injured, and the helicopter was destroyed by impact forces and fire.

The Transportation Safety Board of Canada is participating in the investigation as an accredited representative, as is Pratt and Whitney Canada as a technical advisor. The investigative team was also assisted on scene by numerous other federal, state and local law enforcement and public safety agencies.

The wreckage was located in the foothills of the Santa Monica mountains, in a mountain bike park. The impact site was on an approximate 34 slope. The impact crater was 24 feet-by-15 feet in diameter and 2 feet deep. 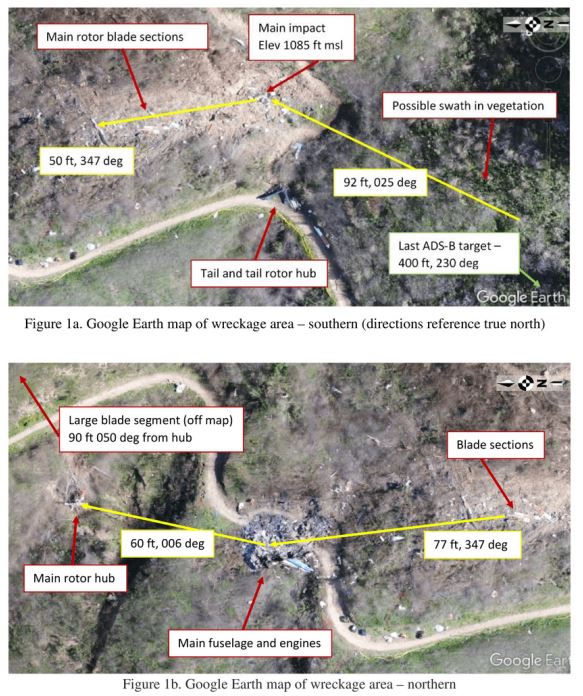 All significant components of the helicopter were located within the wreckage area. Examination of the main and tail rotor assemblies found damage consistent with powered rotation at the time of impact. The initial point of impact consisted of highly fragmented cabin and cockpit debris.

The vertical pylon and horizontal stabilizer were located about 40 feet below (downhill from ) the impact crater. A witness mark consistent with the length and width of a rotor blade and containing fragments of rotor blade skin and honeycomb was positioned perpendicular to the direction of the debris line and directly above the impact crater.

One piece of 2 -inch diameter tree branch was cut cleanly in 3 locations (similar to saw cuts ) about 30 feet prior to the initial impact crater. Approximately 95 % of the main rotor blades were recovered .

All four blades exhibited similar damage consisting of midspan bending, pocket separation ,blade tip separation, and leading-edge indentations and scuffing. The main wreckage was about 127 feet from the impact crater along a 347° bearing ( magnetic ) and consisted of the empennage / tailboom, both engines , avionics boxes, and portions of the cockpit instrument panel.

The entire fuselage / cabin and both engines were subjected to a post crash fire. The cockpit was highly fragmented. The instrument panel was destroyed and most instruments were displaced from their panelmounts. Flight Controls were fragmented and fire damaged .

The engines were found lying inverted near the empennage in the burned area. The accessory gearboxes and parts of the inlet cases of both engines were thermally destroyed. Viewable sections of the engines showed no evidence of an uncontained or catastrophic internal failure.

The No. 2 engine first -stage compressor blades exhibited tip curl in the direction opposite of rotation, consistent with powered rotation at the time of impact. The engines were recovered for detailed disassembly examination.

ATC communications and radar data indicate the flight departed KSNA about 0906 PST. N72EX proceeded to the north- northwest at an altitude of about 700 to 800 feet mean sea level (msl under under visual flight rules (VFR ). At 0920, as the aircraft neared the Burbank class C airspace, the pilot requested to transition the area along Highway 101.

The current Burbank weather observation reported instrument flight rules (IFR ) conditions. In response to the pilot s request, the air traffic controller advised that cloud tops were reported at 2 ,400 feet msl and queried the pilots intentions; the pilot then requested a special VFR clearance ( an ATC authorization to proceed in controlled airspace at less than VFR weather minima).

The air traffic controller advised that the pilot would need to hold for a short time due to IFR traffic, which the pilot acknowledged. At 0932, ATC cleared the pilot of N72EX to transition the class C surface area following the 5 freeway, maintaining special VFR conditions at or below 2,500 feet.

The pilot acknowledged with a correct readback and climbed to approximately 1,400 feet msl (600 feet agl). In response to query , the pilot replied to the Burbank ATC that he would follow Highway 118 and “loop around VNY [Van Nuys Airport follow Highway 101. ATC acknowledged and coordinated.

At 0939, as N72EX was passing west of Van Nuysat 1,500 feet msl, the VNY controller asked the pilot if he was in VFR conditions. The pilot replied “VFR conditions, one thousand five hundred, and the VNY controller advised him to contact Southern California Terminal Radar Approach Control (SCT) for radar advisory services. The pilot reported to SCT that the flight was going to Camarillo at 1,500 feet.

There were no further transmissions. Radar/ADS - B data indicate the aircraft was climbing along a course aligned with Highway 101 just east of the Las Virgenes exit . Between Las Virgenes and Lost Hills Road, the aircraft reached 2 , 300 feet msl (approximately 1,500 feet above the highway, which lies below the surrounding terrain ) and began a left turn. Eight seconds later, the aircraft began descending and the left turn continued.

The descent rate increased to over 4,000 feet per minute (fpm ), ground speed reached 160 knots. The last ADS- B target was received at 1,200 feet msl approximately 400 feet southwest of the accident site. 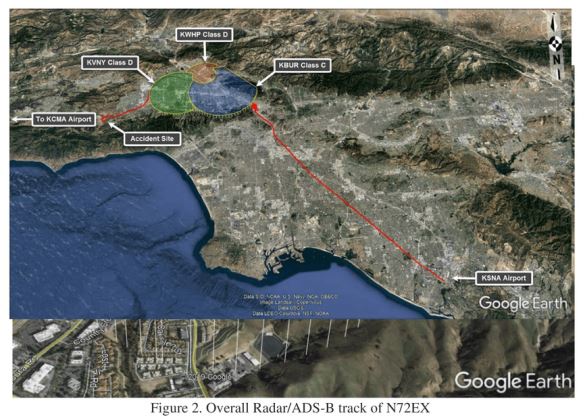 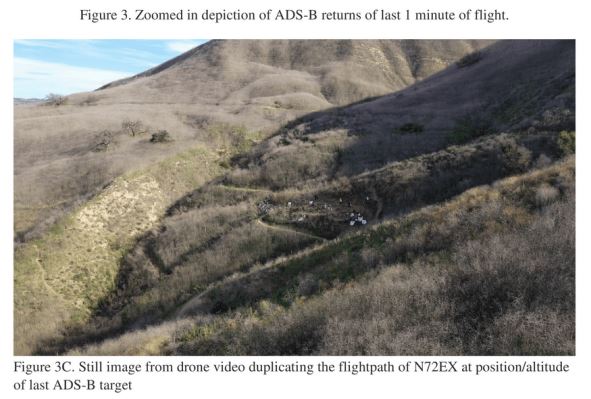 At the time of the accident, the automated surface observing system (as augmented by ATC ) at VNY, located about 11 nautical miles east-northeast of the accident site atan elevation of about 800 feet, reported a calm wind, visibility of 2 . 5 statute miles, and haze and an overcast ceiling of 1,100 feet above ground level.

An ALERT Wildfire camera image (figure 4 ) taken at 0944 PST looking southeast toward the city of Van Nuys, as publicized on the National Weather Service (NWS) Los Angeles Twitter account, depicted the top of the cloud layer to the east of the accident site. The NEWS analyzed the top of the cloudlayer to be about 2,400 feet above mean sea level near the terrain in the foreground of the image. 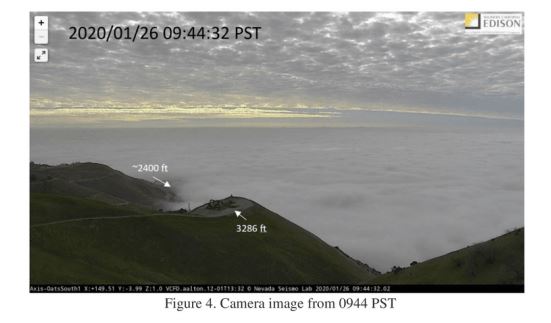 Videos and photos taken by the public in the area of the accident also depict fog and low clouds obscuring the hilltops. Figure 5a was taken by a witness on the mountain bike trail about 0950. The witness stated that the area was surrounded by mist.

He Said he began to hear the sound of a helicopter, which he described as appropriate for a helicopter flying while in a powered condition. He Perceived the sound getting louder and saw a blue and white helicopter emerge from the clouds passing from left to right directly to his left.

He judged it to be moving fast, travelling on a forward and descending trajectory. It started to roll to the left such that he caught a glimpse of its belly. He observed it for 1 to 2 seconds, before it impacted terrain about 50 feet below his position. 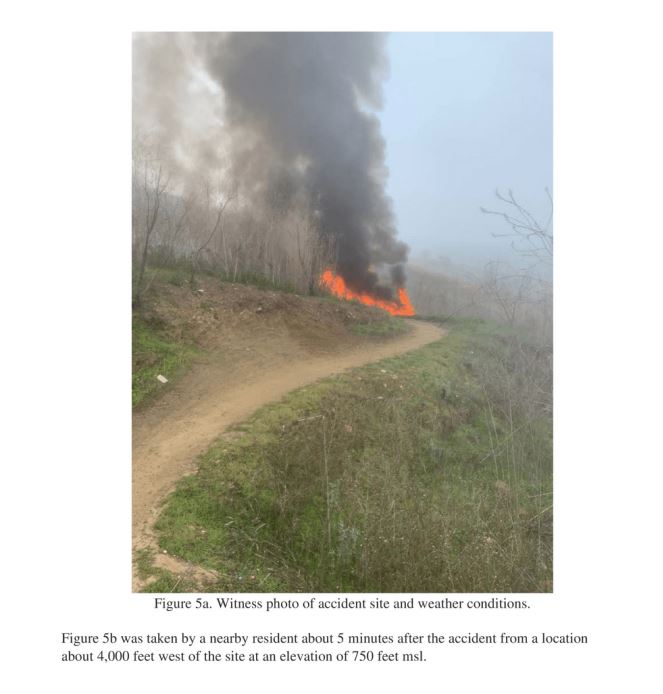 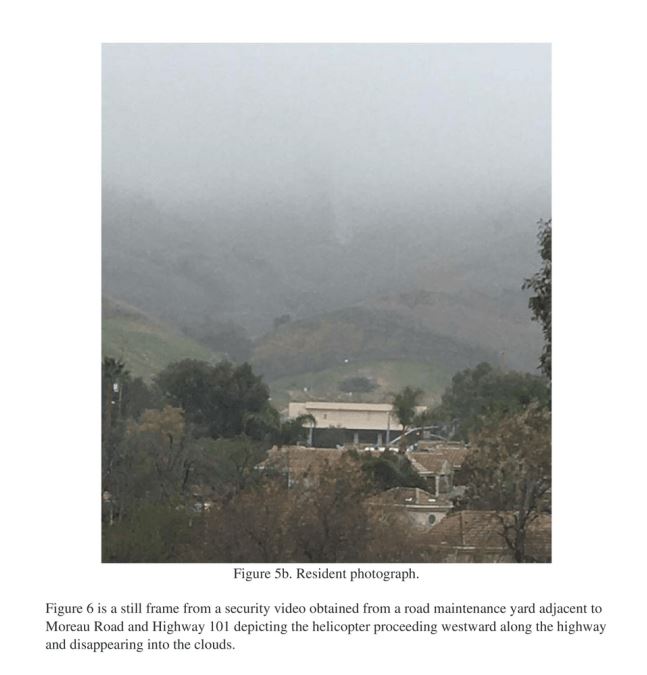 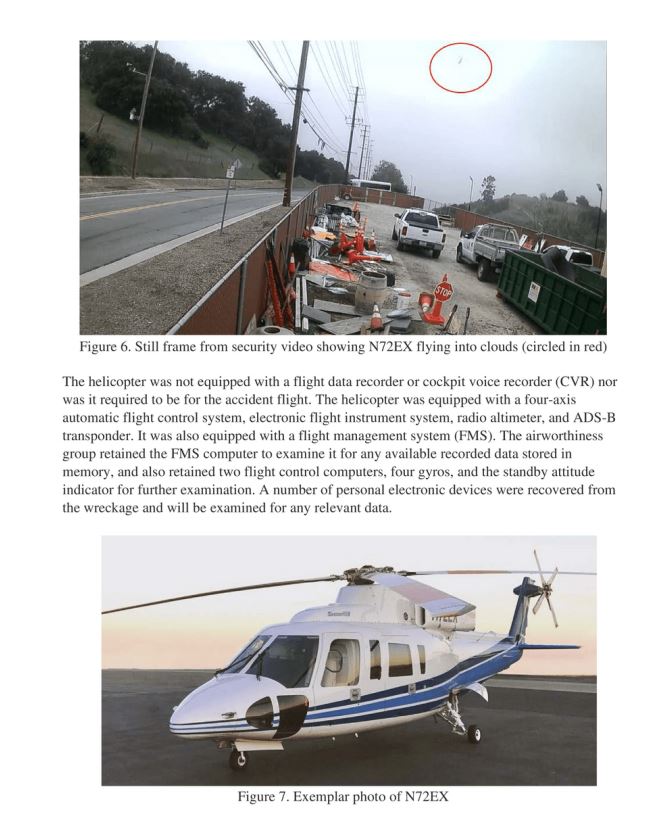 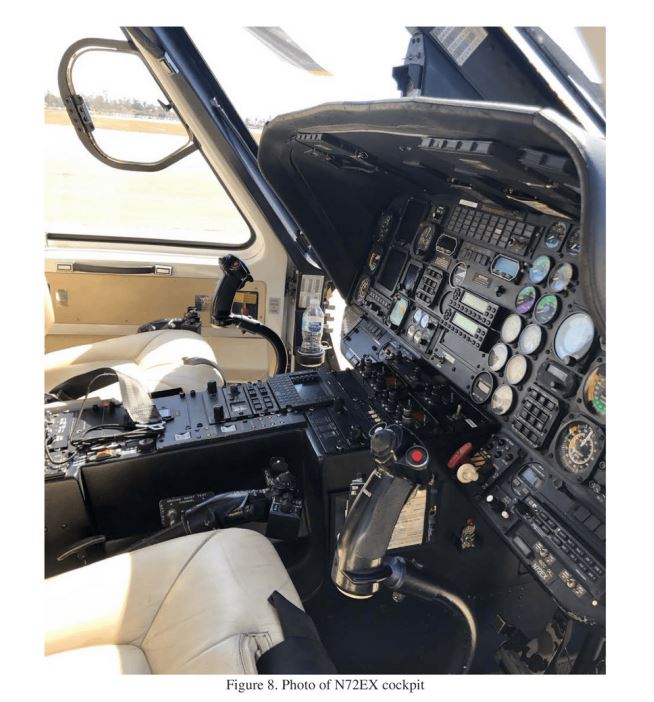 The helicopter, serial number 760379, was manufactured in 1991 in a 12-passenger seat configuration and equipped with two Pratt & Whitney PT6B-36A turbine engines.

The Helicopter used a four-blade, fully articulated main rotor system , four-blade anti- torque system and retractable landing gear. After the sale to Island Expressin 2015, the helicopter was converted to an -passenger seat configuration with two pilot stations up front and eightpassengersin the rear,separated by a bulkhead with sliding acrylic windows.

Passengers Rating Was 2 for occupant divans,one facing forward,the other rearward. Maintenance records show the helicopter had 4716.1 hours at the time of the accident. There were no outstanding airworthiness directives or minimum equipment list items, and all inspections were up to date.

The pilot, age 50, had worked for Island Express for about 10 years. According To FAA records, the pilot heldan FAA commercial certificate with ratings for helicopter and instrument helicopter, as well as an FAA instructor certificate for flight, instrument, and ground instruction.

His most recent second-class medical certificate was issued on July 3, 2019, with a limitationstating, “must have glasses for near vision.” At the time of his last medical application, he reported 8,200 total hours of flight experience.The pilot logged about 1,250 total hours in the S76 helicopter.

His most recent flight review, including proficiency training inadvertent entry into instrument meteorological conditions (IIMC) and unusual attitude recovery, was conducted in a helicopter with EUROSAFETY International on May 8, 2019. The pilot received satisfactory grades for these maneuvers.

At the time of the accident, Island Express Helicopters had 25 employees, including 6 pilots.