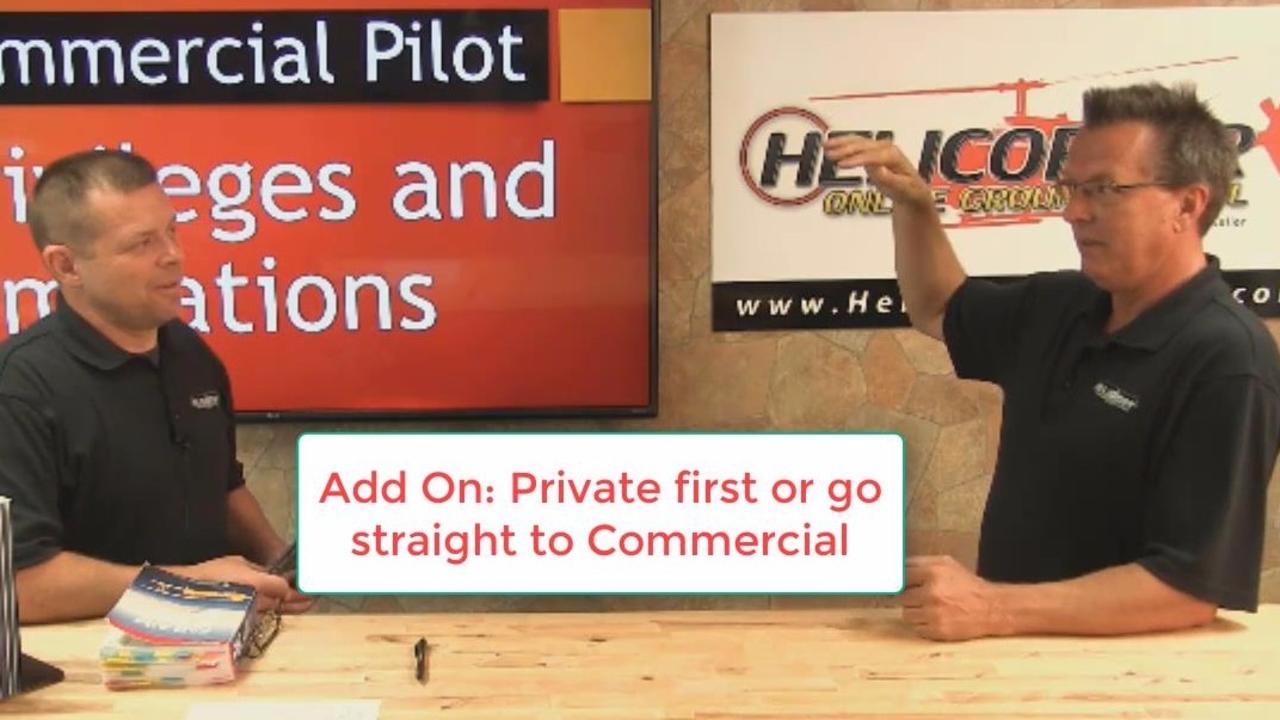 Gary Cleveland:                And they've pulled off going from private fixed wing to commercial helicopter, so it's doable, very doable.

Kenny Keller:                     It's doable. The thing that I've seen over the years is a person will say, "I want to go straight to commercial." Okay, and then they realize that to get their PIC time, they're going to have to do a substantial amount of flying around alone in the aircraft. They go, "You know, if I had my private, I could take up my friends and family, while I'm building that PIC time."

Sometimes people will choose to go the private route first, only because they'll need 10 of solo. With the commercial, you need 35 PIC. You could do 10 hours of solo, get your private, take your wife, your girlfriend, your friends, your family. You can go play and have fun while you're building your PIC time, then do the commercial. It's really a personal preference. If you're not worried about taking up people to go fly around and have fun, heck, go straight to commercial.

If you wanted to be able to, while you're spending your money, and you want to take your friends and family with you, then do the private first, then do the commercial add-on. Yeah, you can go either way.

Kenny Keller:                     No? Last thing we'll mention is the Enstrom. Poor Enstrom. Not poor Enstrom, we love this helicopter N8626P. It's a cream puff. Oh my God, known it forever. It's going home for annual inspection the end of this month. Gary's going to try to finish up two ratings this month without overworking himself. Then we have a third ground school member that wants to come this month, too. We may have to hold him off a little bit, but 26 Papa is going home for annual, and we don't normally get it back until November, so that Dr. Nick, our friend, can enjoy the helicopter a little bit. He lets us have it fall till spring, versus it sitting.

We will be looking for some opportunities for aircraft, and anybody that has an aircraft ... I'm not looking to buy an aircraft, that's not going to happen. But if like in Nick's case, Nick has this cream puff helicopter. He trusts us, of course. He's one of my really, really close friends. He loves the fact that in the wintertime, instead of sitting six months and doing nothing, we generate money for him. He has his own LLC. He gets paid direct to his LLC. We get to use the aircraft. We get paid for our time. It's a beautiful thing.

We have members bringing their own aircraft, and that's fine. Bring your own aircraft, if you want to come and do a rating. But we're going to be a little tight on aircraft. Other aircraft we use, again, they're privately owned. They go do spring work or whatever, and then they come back. We are looking for some opportunities, somebody that had an aircraft, but we're not going to overwhelm ourselves, either.

Gary enjoys flying. I want to fly. We are going to fly, but we're also committed to new content and getting the hogs just up to speed, and really just blasting things out there, and blowing your minds, like blow your minds. That's what we're doing.

Kenny Keller:                     Yes. Use your checklist. All right, thanks for those that have liked, followed, shared, made comments, asked us questions. This content will be in ground school. Lots of great stuff to come. Thanks, everybody, and watch out for bigger, better, badder, because it's coming.

Check out our large podcast library by clicking the podomatic button below: